We recently provided well service to a home in Hopatcong, NJ that was in need of a bleed-back system to their prevent pipes from freezing. The customer’s home had previously been a summer home, but was now going to be used year round. The pipe to the well was not buried below the frost line and that was going to be a problem since they now wanted to occupy the home in the winter months. 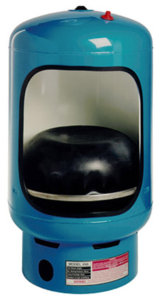 The frost line is the maximum depth of soil that freezes in the winter. The New Jersey frost line is about 3 feet deep and the pipe on this well system was only buried about 1 foot deep, as it was originally intended to be used only as a summer home. Rather than digging up the whole 100+ feet of pipe and reinstalling it below the frost line, we installed a bleed-back system.

Many times we can prevent pipes from freezing by using heat tape, but in this situation there was existing pipe that was three feet above the ground with a 90 degree elbow that the heat cable would not pass through. This meant that a bleed-back system would be the next best option.

In this particular situation, the customer had a pre-existing Well-X-Trol bladder type well pressure tank. While this is a great piece of equipment, it is not well suited to a bleed-back system. What we needed was a bladderless well tank. We chose a bladderless WELLMATE HP-9 hydropneumatic tank. This WELLMATE tank is also a good choice for replacing existing, older style galvanized tanks which were used in the past for bleed-back systems. Keep in mind you should not replace any air-release tank with a bladder type tank as a the air coming up will be forced out through your faucets. If you do, make sure the pipe is below frost line for your area and the snifter is removed from the check valve and the bleed-back hole on the drop pipe in the well is plugged. 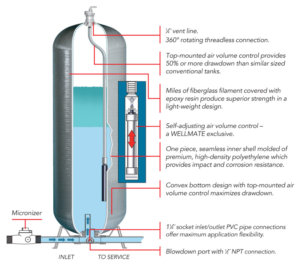 The operation of the bleed-back system is relatively simple. When the well pump turns on the column of air is pushed into the first well tank, which is an hydropneumatic tank, bleed-back tank or air-release tank. When too much air is built up in the bladderless tank, it is released through an air ejector valve and then only water is let through the system. The water will go through to the second well pressure tank, the bladder tank, and be used as it normally would be. This enables the summertime home, where the ground piping is not very significant, to be converted to a year round home by protecting the pipe from freezing during the winter.

The first tank is a very important component of the system. If you didn’t have the bleed-back tank, the air would build up on the bottom of the bladder in the well pressure tank and you would start getting large amounts of air coming out of your faucets. So the tank first ejects the over abundant amount of air that is built up. Every time the well pump turns on and the underground pipe is emptied, a column of air is pushed through the system. The longer the pipe is, the greater the volume of air that will be introduced to the system. Once the first tank with the air ejector in it reaches a certain level of water and air, it will eject the excess amount of air and let the water flow fully into the Well-X-Trol tank. 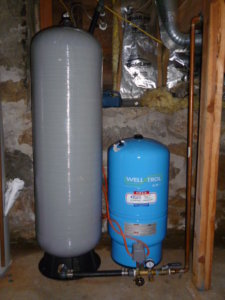 There are situations where a heat tape or heat cable can be used to as a solution, but that wasn’t an option here due to the existing piping. This meant that a bleed-back system was the best choice.

In this situation we used a WELLMATE Composite Water Storage Tank for the air-release tank and a Well-X-Trol well pressure tank for the bladder tank in the system. Together they form a reliable bleed-back system that will prevent pipes from freezing for our customer for years to come!